The WSE listed technology integrator in the third quarter of 2015 noted a 40 percent revenue growth year-on-year, achieving the level of PLN 153.2 million. Since the beginning of the year the Company achieved PLN 7.1 million net result and PLN 523.4 million sales. 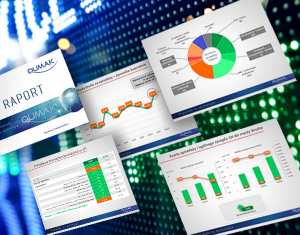 Qumak Group achieved in 3Q of 2015 an income on the level of PLN 153.2 million, in comparison with PLN 108.7 a year earlier. Since the beginning of the year, sales grew y/y by circa 30 percent to the level of PLN 523 million. This means that the Company at present achieved 90 percent of the value of the last year’s income.

After three quarters, Qumak’s net profit amounted to PLN 7.1 million (+34% y/y) and was the highest since 2010. The Company, during 9 months as well as in the third quarter, improved also gross sales margin by nearly 46 percent.

– In sales structure, in accordance with our strategy, we have a large share of projects in the infrastructure segment. Future will largely depend on tenders in a new perspective of EU, which should appear still this year – said Paweł Jaguś, President of Qumak S.A.

– The whole year 2015 will surely be a record one in terms of sales. Considering profit, such a chance also exists, but the fourth quarter will be a deciding one, and we enter it with a solid orders portfolio to be realized still this year – Paweł Jaguś commented.

Backlog of the Company at the end of this year is 40 percent greater than in the analogical period in 2014 and amounts to PLN 187 million.

The Management Board of Qumak consistently realizes a policy of costs optimization and increasing operational security.

– We conduct intensive actions that aim at reducing external cost of sales and providing a strict control of all operational processes, from submitting an offer to completing realization and maintenance – Paweł Jaguś added.