Qumak performs technical infrastructure of new taxiways at the airport of the Rzeszów University of Technology. This is a part of works within the scope of a contract realized in a consortium with the Miejskie Przedsiębiorstwo Dróg i Mostów in Rzeszów. Total value of the contract is PLN 4.5 million net, from which the scope of works of the Warsaw Company amounts to PLN 1.7 million net. 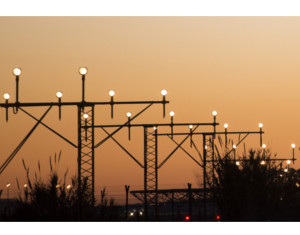 Within the scope of the won contract there will be constructed a new fire-fighting and rescue way and there will be built new taxiways of airplanes, together with rebuilding of already existing ways. Qumak will be responsible for performing electric power and telecom networks with the installation of navigation lighting and illuminated vertical signs. In addition, the Company will expand a power supply system and will perform a system of control and monitoring of lighting in the air traffic control tower. The works will be conducted in three stages – completion of a final stage is planned to take place in the middle of the next year.

– We have already performed many projects at Polish airports, and our experience is appreciated by ordering parties. What is more, the Polish airport infrastructure is still going to be modernized in order to meet the new security standards. Qumak as a contractor wants to be present in these projects – says Wojciech Strusiński, Vice President for Sales in Qumak S.A.

Polish airport infrastructure is still going to be modernized in order to meet the new security standards. Qumak as a contractor wants to be present in these projects

Airport of the Aviation Training Center of Rzeszów University of Technology is an independent airport located south to the existing Airport Rzeszów-Jasionka. This Center is an independent extra-faculty organizational unit of the Rzeszów University of Technology. Aim of its activity is aerial training of the University students at the faculty “piloting”, who learn theory at the curriculum realized at the Faculty of Mechanical Engineering and Aeronautics, practical learning and some theory classes take place in the Center.

Qumak has already performed among others a rebuilding of navigation lighting system at the nearby Airport Rzeszów-Jasionka and similar orders e.g. at airports in Gdańsk, Katowice, Poznań, and Modlin near Warsaw.

The Company has also realized among others a comprehensive system of transport and control of registered baggage (BHS) at the Krakow Airport in Balice, as well as performed a rebuilding of BHS at the Warsaw Chopin Airport. Moreover, the Company implemented systems of meteorological services “AWOS” (Automated Weather Observing System) at eight Polish airports and an “Ice-Alert” system at the seven of them.

Realizations within the scope of modernization of airports: