It enables cooperation of 24 persons in one virtual world and will be used to train teams performing manoeuvres with the use of military robots – Qumak completed the realization of a simulator for the Military University of Technology. The project launched in October of the value exceeding PLN 2.6 million net is one of the biggest investments of this sort in Europe. The project was performed in a consortium with Ośrodek Badawczo-Rozwojowy Urządzeń Mechanicznych “OBRUM Sp. z o.o.” 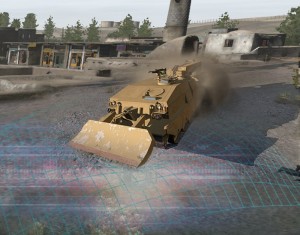 Simulator will enable trainings for cadets who in future will steer robots on a battlefield. The project also enables entering to a virtual world machines designed at the University and testing their effectiveness, which will accelerate the process of implementing robots to the Polish Armed Forces.

Engineers of the company developed eight training simulators. Each of them consists of 3 positions, together with software, enabling training of a commander and two operators of cooperating robots (or a robot and an engineering machine). In a virtual environment it is possible to train not only robots, but also all military vehicles, e.g. “ROSOMAK”.

The implemented simulator provides among others training conditions in the following areas: