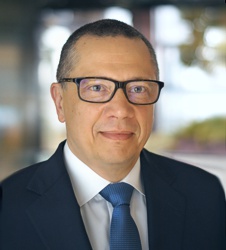 Sławomir Połukord graduated from the Wrocław University of Technology, where he finished studies at the Faculty of Electronics (specialty: IT systems), as well as postgraduate studies at the Faculty of IT and Management (program Executive MBA, organized together with the Central Connecticut State University). Moreover, he holds a title of the Associate in Project Management obtained from the George Washington University.

He is operating in the IT sector for over 25 years. To 1996 he conducted his own business activity in the scope of production and software implementations, as well as designing and performing network systems. During 1996-1999 in a branch of ComputerLand S.A. as a Director for Realizations he was responsible for performing projects of the Company in the Lower Silesia region. During 2000-2001 in NOKIA Polska he was a team leader implementing solutions of Mobile Packet Core in telecommunication networks. During 2001-2014 at Sygnity S.A. he fulfilled various roles: from Project Manager, Project Management Office Director, Division General Manager and Proxy of the Company. In the meantime he was also appointed to management boards of subsidiaries: Vice President of the Management Board of WINUEL S.A. (2010-2011), Vice President of the Management Board of ARAM sp. z o.o. (2009-2010), President of the Management Board of ZEC InfoService sp. z o.o. (2003-2009). Since 2015 at Microsoft, where he was responsible for business development in the public sector and health care sector.

In accordance with a submitted statement, Sławomir Połukord, after undertaking the function in the Management Board will not perform any activity which is a competition to the business activity of Qumak S.A. as well as he does not perform any activities in other companies conducting a competitive activity as a partner of a private partnership or as a member of a body of a joint stock company or any other legal entity that is a competition to the Company. Moreover, he is not listed in the Register of Insolvent Debtors kept under the act of 20 August 1997 on the National Court Register. 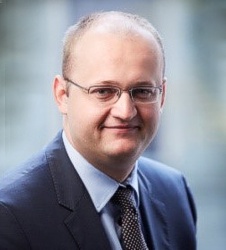 Michał Markowski
Vice President of the  Board

A graduate of the Wrocław University of Technology in the fields of financial management and IT science. Doctor of Information Science and International Finance Qualifications (Association of Chartered Certified Accountants – ACCA).
He started his professional career as a programmer and project manager, then he developed his career in financial and consulting positions. In the years 2010 – 2012 he worked at Deloitte Advisory as a Senior Associate in the department of financial valuations and modeling as well as transaction advisory. In the years 2012 – 2014, the Chief Economist and Minister’s Advisor at the Ministry of the Treasury responsible inter alia for creating a comprehensive concept and legal and financial solutions of the Polish Investments Program (Polish Development Fund), conducting consolidation in the chemical sector and establishing the Grupa Azoty and structuring PLL LOT S.A. In 2014-2016, Director of the Strategy and Analysis Department at the S.A.
In the years 2016-2018, the director of PMO and M & amp; A in ProService Finteco sp. O.o. responsible for conducting acquisitions of companies for the Oaktree PE investment fund, as well as strategic and financial consulting.
From 2015, he is the president of the Pointing Partners Accounting Office.
Member of Supervisory Boards and Audit Committees (including Atende SA, Polish Airlines LOT, Livechat SA, Playway SA, Polish Investments Development, Ventures & Partners.

Privately, he is passionate about programming and sports – from golf to paragliding.

From November 2018, he deals with the area of ​​finance in the Company. 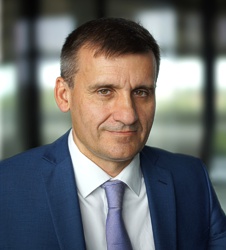 Konrad Pogódź
Vice President of the  Board

Konrad Pogódź graduated from the Faculty of Electronics, Automatics and Electrical Engineering at the AGH University of Science and Technology in Kraków. He completed postgraduate studies within the scope of Business Management at the Cracow School of Business, Cracow University of Economics.

For over 23 years he is working in Qumak S.A. in the IT sector. In 1995, he undertook a function of a Service Department Manager. During the years 2004-2015 he fulfilled a function of among others a Director of IT Realizations, and a Director of Organization and Development. Since 2015 he is managing realization of all IT projects at Qumak S.A. In the Management Board he will be responsible for the Realizations Division.

Konrad Pogódź submitted a statement that he does not perform any activity which is a competition to the business activity of Qumak S.A. and he does not perform any activities in other entities conducting a competitive activity, as a member of bodies of a joint stock company or as a partner of a private partnership or a partnership. He is not listed in the Register of Insolvent Debtors kept under the law of 20 August 1997 on the National Court Register.